Peloton vs. MYX II vs. NordicTrack s22i: Which Bike Is Best? 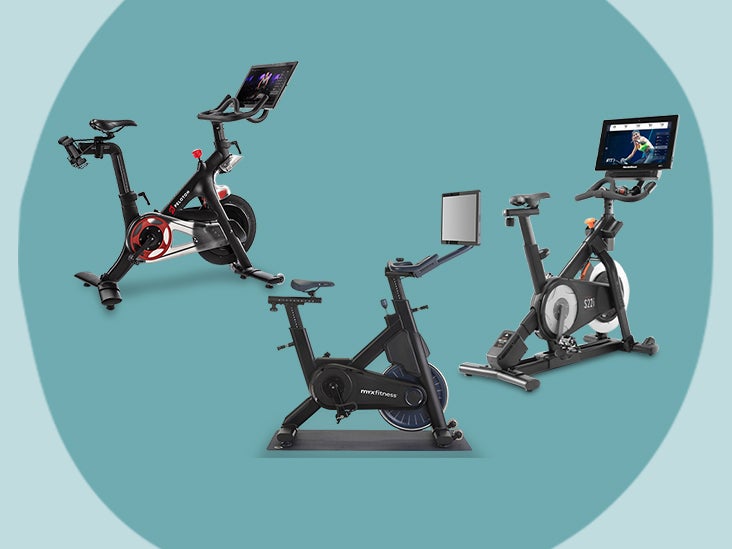 The Peloton Bike and Bike + offer live and on-demand classes, along with several other features that set them apart from other exercise bikes.

Equipped with magnetic, digital resistance and an HD touchscreen for streaming workout classes, it’s easy to see why Peloton bikes are preferred by so many and viewed as the cream of the crop.

In addition to price, the main differences between the Peloton Bike and Bike+ are the sound system, storage capacity, and camera quality.

The Bike+ is also equipped with a larger touchscreen that rotates, as well as Auto Follow technology, which adjusts your resistance to match your instructor’s during workouts.

What’s more, Peloton offers three package options that include additional bike accessories, such as a bike mat, resistance bands, a yoga block and strap, and cycling shoes, which are particularly important, as Peloton bikes require Delta-compatible, rather than SPD, cleats.

MYX II and MYX II Plus

With a sleek, interactive touchscreen tablet, a Polar heart rate monitor, access to thousands of class options, and pairing capability with Apple Watch, it’s easy to see why the MYX bike is a popular Peloton alternative.

While the design of the bike is the same, the MYX package includes a white-colored bike, while the MYX II Plus bike is available in both dark charcoal and white.

The other main difference is the MYX II Plus includes additional workout equipment for a full-body workout, including:

Yet, despite its lower price tag, the bike is packed with unique features, making it an option that should be on your radar.

In addition to 24 levels of digital resistance, it comes with built-in speakers and a wide range of live and on-demand classes using iFit.

It’s also one of the few exercise bikes on the market offering multiple levels of incline and decline, as well as Automatic Trainer Control.

Curious which bike is best? Keep reading to find out which one reigns supreme.

While they’re all around 22 inches (55.88 cm) wide, the NordicTrack is by far the longest of the three bikes.

Meanwhile, the MYX II beats out the Peloton as being the most compact option.

As all three bikes are made with high quality materials, it’s a tie between the NordicTrack s22i and MYX II as both offer great value for the price. Though, if you’re tight on space, the MYX II is the way to go.

While the NordicTrack s22i’s padded ergonomic saddle wins out over MYX’s standard bike seat, the s22i’s seat is still quite firm and not as comfortable as the Peloton’s ergonomic sport-style saddle.

Similarly, the Peloton features higher quality aluminum pedals, though you’ll have to purchase a set of cycling shoes, as the pedals are only compatible with Delta cleats.

Meanwhile, the NordicTrack s22i is equipped with standard toe cages.

The MYX II’s dual-sided pedals are the most versatile, as they allow you to use either SPD clips or your standard gym shoes.

Overall, Peloton wins out. Although, the MYX II’s dual-sided pedals are a definite bonus.

All three bikes are equipped with touchscreen tablets that are similar in size.

All three have built-in speakers and Bluetooth capabilities for pairing with your workout headphones.

One of the main draws of these smart bikes is the ability to stream classes on their respective apps, including iFit for the NordicTrack s22i, MYXFitness Connected Fitness for the MYX II bikes, and the Peloton app for the Peloton bikes.

Peloton and iFit are both popular fitness apps, mainly differentiated by the fact that iFit tends to be more focused on personal coaching, while Peloton is known for offering better music and a more group-focused community.

Both apps also have leaderboards that allow you to see how you’re performing and compare your stats to those of other users.

However, MYX Fitness recently teamed up with Openfit, allowing MYX users to join Openfit LIVE rides. However, you’ll need an Openfit subscription, which costs $29 per month.

Another important factor to consider is app compatibility.

While the NordicTrack s22i is powered by iFit, it’s also compatible with the Peloton app. Similarly, the MYX II can be used with both MYXfitness Connected Fitness and Openfit.

Peloton is the most limited, as it’s only compatible with the company’s app.

One thing to note is the iFit Individual plan is a yearly subscription that costs $180 per year, which comes out to $15 per month.

Providing excellent value and variety, NordicTrack is once again the winner, giving you the best of both worlds with the ability to stream from two of the most popular fitness apps.

The basic Peloton Bike and Bike+ package doesn’t come with any accessories, but if you splurge for an upgraded package, you can get cycling shoes, headphones, bike weights, a heart rate monitor, and more.

Meanwhile, the NordicTrack s22i comes with a set of weights, and the MYX II offers a Polar heart rate monitor.

The MYX II Plus is the best option if you’re looking to fill out your home gym, as it includes free weights, a kettlebell, a foam roller, resistance bands, an exercise mat, and a stability mat.

As a result, the MYX II Plus is the clear winner, with the NordicTrack s22i being a good runner-up option.

Price (including the cost of the bike, app subscription, shipping, and assembly)

When comparing the cost of these machines, it’s important to factor in the price of the bike itself, as well as any add-ons, such as delivery fees, monthly app subscriptions, and required accessories.

Here’s a breakdown of the associated costs with each bike:

Now, keep in mind that these companies often offer discounts.

For example, Peloton is offering its original bike for $1,495.

Still, even with the discount, both the NordicTrack s22i and MYX II Plus provide better overall value as you don’t need to invest in cycling shoes.

The decision between the two comes down to whether you value the large number of accessories included with the MYX II Plus or the free 1-year iFit membership offered by NordicTrack.

Winner: NordicTrack s22i if streaming is top priority, with the MYX II Plus being a winner if you’re interested in additional exercise accessories.

All of the companies include a 30-day return policy.

Offering the most extensive warranty, the NordicTrack s22i once again comes out on top.