Our health care system depends on physicians donating their time 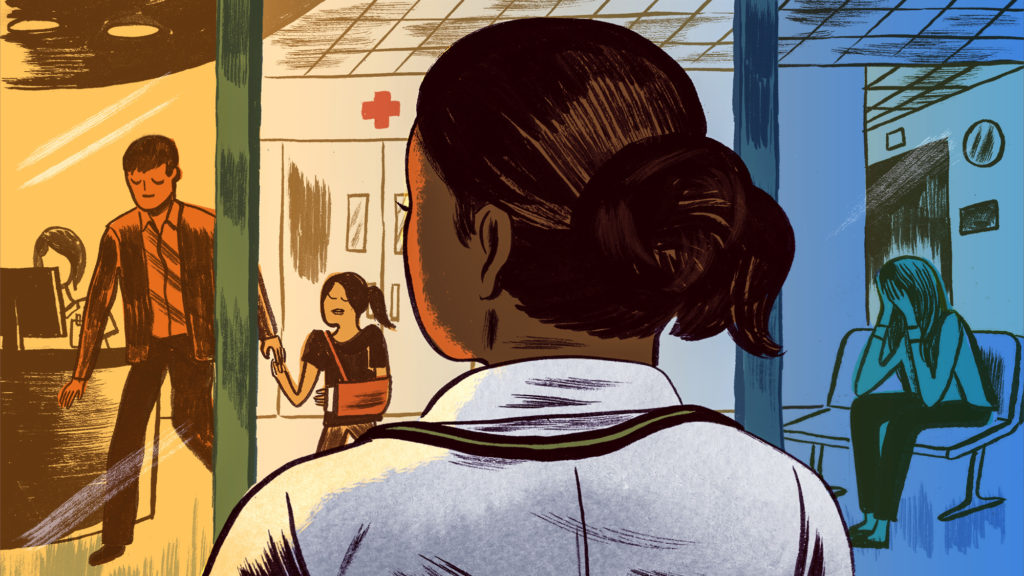 During my third year of residency, I staggered my work hours in an attempt to avoid Boston’s soul-crushing pre-pandemic traffic. Some days I would strategically arrive very early and other days I would leave very late. On the days I stayed in the office I would often see one of my supervising doctors there, working deep into the night. Why, I would wonder, was this doctor seemingly so … inefficient. I judged this toiling as a personal failure.

Nearly three years later, having taken on a heavier caseload, I developed a deeper understanding of her work. This summer, for example, I needed to study for my boards, but felt oversaturated with my responsibilities as a physician-mom. Between preparing for the next day’s patient visits, catching up on clinical notes, and taking care of my children, my evening study sessions yielded diminishing returns. I hatched a plan to study over the weekends, and hired a babysitter to watch my daughters so I could absorb the exam material without distraction.

Weekend after weekend, however, the time I set aside for studying was quickly overtaken by the paperwork I didn’t have the opportunity to finish during the week. My work, ironically, was keeping me from studying for an exam I needed to pass to continue caring for patients. It was also keeping me from my children and forcing me to pay more for childcare. I began wondering why I was so … inefficient.

I had to be doing something wrong. Determined to correct my inefficiency, I began asking colleagues how they managed their time and documentation. Every doctor I asked — both psychiatrists like me and other specialists — told me they, too, were chronically behind and spent a few uncompensated hours outside of work each day catching up on notes and responding to patient messages.

Efficiency, I soon realized, had nothing to do with meeting the basic demands of clinical care. Instead, our health care system actually depends on doctors’ professionalism and donated time. This trend was noted in a 2016 study published in in the Annals of Internal Medicine, which found that doctors — ranging in specialty from internal medicine, to cardiology, to orthopedic surgery — spend up to two hours of personal time each night completing tasks integral to patient care.

Eventually, this leads to a chronic feeling of operating at a loss, and contributes to the burnout driving many doctors to consider retiring or leaving direct patient care. I’m not ready to join them, yet. And I fully acknowledge that caring for others, and the administrative burdens that accompany that care, do not always fit into a discreet workday. I don’t know that our health care system is interested in relinquishing free labor. Still, I’m optimistic that there are ways for individuals to practice medicine that are more respectful to both physicians and their patients.

I regularly receive messages from other doctors in the middle of the night about our mutual patients. One time, when I immediately responded to the message, the doctor, much more senior to me, replied, “Why are you still working?” We had been corresponding about a patient who was experiencing new-onset psychosis and not doing well. As for setting an example, this doctor was clearly still working near midnight, too.

Over the past decade, my mentors have recognized the demands of the electronic medical record and the problem of working outside of work in our profession. I’ve been advised to learn how to tolerate a certain degree of failure and to strategically choose the things I could let slip through the cracks.

One doctor I know chose to “fail” at returning his emails. A physician-mother told me that doing the bare minimum documentation-wise allowed her to spend more time with her children. Another told me she never submits her bills on time. During residency, my peers were coached to set up a voicemail greeting that basically implied, “I’m never going to call you back,” to discourage patients from leaving messages. As a doctor myself, I don’t get upset anymore when my own doctors don’t call me back. I understand that sometimes, it’s simply not possible.

I’ve realized that many in my profession employ the stress heuristic, described by Cal Newport, to make this determination. In the New Yorker, he explains that being overworked allows us to justify cutting benign corners, while simultaneously keeping us trapped in a state of persistent stress. “…There’s always something that’s late, always a message that can’t wait until the next morning, always a nagging sense of irresponsibility during any moment of downtime. Yet the work remains below a level of unsustainable pain that would force a change.”

I’m looking for a change. There is a law that protects workers in France from having to work, after work, giving them a “right to disconnect” from email and phones after hours. Short of moving to France, as I complete my last year of fellowship training, I’m hoping to explore models of medicine that center the human experience of medicine.

I feel lucky, in a sense, that I’ve chosen a medical specialty that lends itself nicely to varied work arrangements. Emergency psychiatry, for example, allows doctors to evaluate patients and provide treatment in a single encounter. Issues inherent to longitudinal patient care and treating outpatients — such as medication refill requests — don’t follow you home. Locum, or temporary, assignments also seem appealing in that the work is contained and affords physicians the opportunity to take breaks between stints of clinical work.

Collaborative-care models allow psychiatrists to contribute to patient care by advising other doctors who are more directly responsible for patient care. This means that you’re one degree of separation from prior authorization requests from insurance companies, and an endless stream of messages and calls from patients. Some psychiatrists even practice without electronic medical records or choose not to participate in insurance plans.

The Covid-19 pandemic has coincided with my coming-of-age as a physician. Perhaps the global health crisis and realities of working-parenthood have sharpened my focus, and made it easier for me to recognize the value of my time. Instead of chasing efficiency and internalizing the angst of its impossibility, I want to achieve a sense of peace by doing good work when I’m doctoring, and disconnecting from patient care when I am not.

Operating at a loss: Our health care system depends on physicians donating their time