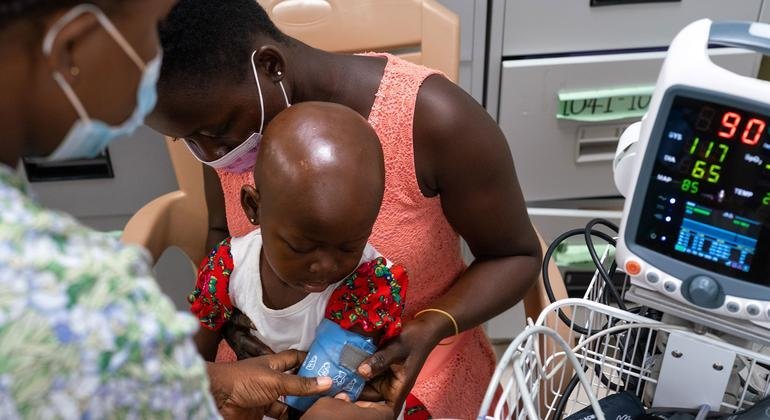 The Global Platform for Access to Childhood Cancer Medicines, launched by the World Health Organization (WHO) and St. Jude Children’s Research Hospital in the United States, seeks to counter an “unacceptable imbalance” in survival rates.

It offers an innovative approach in cancer care by addressing medicine availability in low and middle-income countries, which WHO said is often complicated by higher prices, interruptions in supply and out of pocket costs that result in financial hardship.

The UN agency estimated that each year, 400,000 children worldwide develop cancer. The majority of those living in poorer countries are unable to consistently obtain or afford cancer medicines, resulting in 100,000 deaths annually.

“Close to nine in 10 children with cancer live in low and middle-income countries.  Survival in these countries is less than 30 per cent, compared with 80 per cent in high-income countries,” said Tedros Adhanom Ghebreyesus, the WHO Director-General.

“This new platform, which builds on the success of the Global Initiative for Childhood Cancer launched with St. Jude in 2018, will help redress this unacceptable imbalance and give hope to many thousands of parents faced with the devastating reality of a child with cancer.”

St. Jude, located in Memphis, Tennessee, USA, is a global leader in the research and treatment of childhood cancer and other life-threatening paediatric diseases.

Treatments developed there have helped push childhood cancer survival rates in the US from 20 per cent in 1962, when the hospital was founded, to 80 per cent.

St. Jude is making a six-year, $200 million investment to launch the platform, which will provide medicines at no cost to countries participating in the pilot phase starting next year.

The funding represents the largest financial commitment for a global effort in childhood cancer medicines ever.

“St. Jude was founded on the mission to advance research and treatment of childhood cancer and other catastrophic paediatric diseases. Nearly 60 years later, we stand with the World Health Organization, partner organizations and our Global Alliance collaborators to expand that promise for children worldwide,” said Dr James R. Downing, President and CEO of the research hospital.

“With this platform, we are building the infrastructure to ensure that children everywhere have access to safe cancer medicines.”

The platform aims to provide safe and effective medicines to some 120,000 children between 2022 to 2027, with the goal of scaling up beyond that timeframe.

Countries will receive assistance in selecting medicines, developing treatment standards, and building information systems to track how care is being provided.

Discussions are underway with governments to determine the 12 countries for the initial two-year pilot phase.

It is expected that by the end of 2027, 50 countries will receive medicines through the platform.

Shanghai to reopen subways in easing of COVID restrictions | Wellness/Health

May 25, 2022 Mary Simonson
We use cookies on our website to give you the most relevant experience by remembering your preferences and repeat visits. By clicking “Accept All”, you consent to the use of ALL the cookies. However, you may visit "Cookie Settings" to provide a controlled consent.
Cookie SettingsAccept All
Manage consent