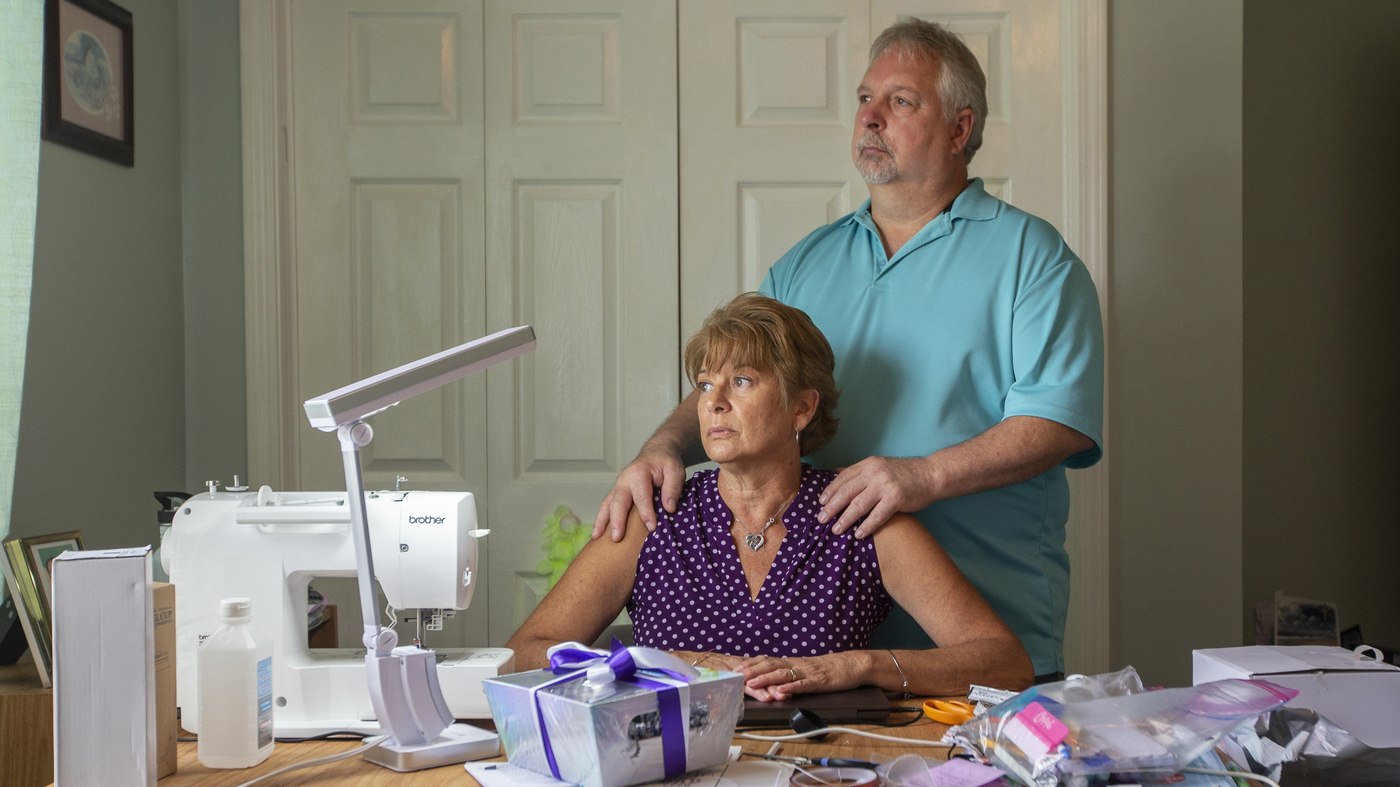 Suzanne and Jim Rybak, inside the craft room where their son, Jameson, would encourage Suzanne to make colorful beach bags, received a $4,928 medical bill months after it was supposedly resolved.

Suzanne and Jim Rybak, inside the craft room where their son, Jameson, would encourage Suzanne to make colorful beach bags, received a $4,928 medical bill months after it was supposedly resolved.

Every now and then, Suzanne Rybak and her husband, Jim, receive pieces of mail addressed to their deceased son, Jameson. Typically, it’s junk mail that requires little thought, Suzanne said.

But on March 5, an envelope for Jameson came from McLeod Health.

Jim saw it first. He turned to his wife and asked, “Have you taken your blood pressure medication today?”

He knew showing her the envelope would resurface the pain and anger their family had experienced since taking Jameson to McLeod Regional Medical Center in Florence, S.C., two years ago.

As KHN previously reported, Jameson was experiencing withdrawal symptoms from quitting opioids. Suzanne feared for her son’s life and took him to McLeod’s emergency room on March 11, 2020.

There, they encountered a paucity of addiction treatment and the potential for high medical costs — two problems that plague many families affected by the opioid crisis and often lead to missed opportunities to save lives.

Jameson was not offered medications to treat opioid use disorder in the ER, nor was he given referrals to other treatment facilities, Suzanne said. The hospital wanted to admit him, but, being uninsured, Jameson feared a high bill. The hospital didn’t inform him of its financial assistance policy, Suzanne said. And he decided to leave.

Three months later, Jameson, 30, died of an overdose in his childhood bedroom.

In the following months, the Rybaks received bills from McLeod Health addressed to Jameson. He owed $4,928, the bills said. Suzanne called and wrote to hospital administrators until September 2020, when the bill was resolved under the health system’s financial assistance program.

That was the last they had heard from McLeod Health until the new envelope arrived March 5 — one week before the two-year anniversary of Jameson’s ER visit. That visit was what Suzanne calls “the beginning of the end for my son.”

When the Rybaks opened the envelope, they found a strikingly familiar bill for $4,928.

“I can’t even describe my anger and sadness,” Suzanne said. “It’s always present, but when we received that statement, we were just stunned.”

There’s no national data to indicate how often patients or their families receive medical bills that were previously paid or forgiven, but hospital billing experts say they frequently see it happen. Patients might receive bills for claims their insurers already paid. A reminder statement may arrive even after a patient has submitted payment.

Unlike “surprise bills,” which often result from policy gaps when a provider is out of network, these are bills that were resolved but continue to pop up anyway. They can carry financial consequences — patients wind up paying for something they don’t truly owe, or bills get passed on to debt collection agencies, triggering more phones calls and red tape. But often it’s the emotional toll that wears on patients most, spending hours on the phone with customer service each time the bill resurfaces or reliving the situations that led to the bill in the first place.

For families like the Rybaks, the cost can feel never-ending. Suzanne Rybak refused to engage with McLeod Health again but told KHN about the new bill. In response to questions from KHN, McLeod Health determined the bill that the Rybaks received was a mistake.

“Unfortunately our software system regenerated this statement due to a technical issue,” wrote spokesperson Jumana Swindler. “We are checking to ensure that it has not happened to any other patients and we are sorry this family was impacted by the error.”

A week after KHN’s inquiry, the Rybaks received a letter from the hospital explaining and apologizing for the mistake.

Many bills result from human error

Many medical billing cases like this “boil down to human error,” said Michael Corbett, director of health care consulting for LBMC, a Tennessee-based firm that consults with health systems nationally on issues like billing and revenue. “Facilities don’t have a lack of tools [to avoid this.] It’s a breakdown in their processes.”

A billing agent may forget to mark the account as paid, he said. Or the hospital might contract its billing to an outside company and fail to inform them that the bill was covered under the hospital’s financial assistance program.

As hospitals and medical practices increasingly consolidate under large health systems, the chances for errors increase. Even hospitals and clinics within the same system may have different backend software, and within each hospital there can be separate programs for billing and electronic health records, Corbett explained.

Larger health systems may also have more people processing any given bill. If responsibilities are not clearly defined, multiple employees could unknowingly act on the same patient account.

The COVID-19 pandemic has exacerbated potential errors, Corbett said. New medical billing employees may have received quick, virtual training and are working remotely with little interaction with team members or oversight. Some billing departments are understaffed, leading to delays in patients receiving bills or follow-up notices, he added.

To curb mistakes, Corbett said, hospitals need to invest in more comprehensive training and supervision for billing employees; enact consistent processes for everything from how patients’ financial information is collected at registration to when they’re sent bills; and, perhaps most important, track whether those processes are being followed.

For patients who find themselves in a situation like the Rybak’s, Corbett advises calling the hospital billing department and asking to speak with a senior leader in its revenue cycle division. Unlike an account representative, this person could make decisions, Corbett said.

At the end of the conversation, ask to get the explanation in writing, he added.

“You’d anticipate and hope those notes are being recorded,” Corbett said, but that may not be the case. Or notes might get recorded in a section of hospital files that are excluded from a patient’s legal medical record, making it difficult for patients to access later.

A binder of documents

For Suzanne Rybak, the idea of calling McLeod Health to straighten out yet another bill was too much. Instead, she added the statement to a binder of paperwork, in which she’s documented all her billing struggles with McLeod Health over the past two years.

Still, out of sight hardly means out of mind. The binder sits in her craft room, where she remembers Jameson encouraging her as she made beach bags and other items. He’d say to use “fruity colors,” Suzanne recalled — his way of describing tropical colors. Now she makes candles in that room, focusing on tropical fragrances she knows Jameson would have loved.

“I want hospitals to realize that you’re not just sending this bill to an address,” Suzanne said. “There are people who live in that house, who are going to open that mail and have feelings. … It’s a disaster to bring all that up again.”