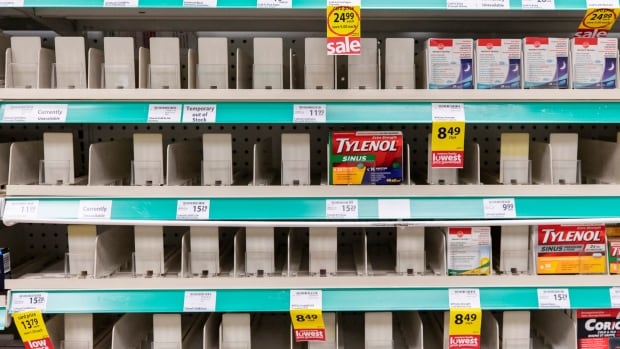 Drugstore shortages in Canada are now extending beyond children’s pain and fever medication into other over-the-counter and prescription drugs as supply problems worsen across the country.

Hundreds of medications are either running low or out of stock completely, with some store shelves depleted of children’s allergy medication, adult cough and cold syrup, eye drops and even some oral antibiotics, industry experts say.

The situation is leaving pharmacists scrambling to find alternatives while many Canadians end up at doctor’s clinics or in emergency rooms for ailments they would normally treat at home.

“It continues to get worse,” Pam Kennedy, pharmacist and owner of the Bridgewater Guardian Pharmacy on Nova Scotia’s South Shore, said in an interview on Tuesday.

“The pharmacy teams are working hard to try to find other options for patients, but that’s becoming increasingly difficult.”

Nearly a third of prescription drugs are now on back order, she said.

Some drug brands have indicated the shortage is expected to extend into early 2023, Kennedy added.

“I don’t think there’s been a liquid Buckley’s available for months,” she says of a popular cough syrup brand. “The cough and colds shortage has been problematic.”

Drug shortages in Canada started as early as last spring. But the supply crunch was exacerbated in recent months by soaring demand amid the spread of influenza, RSV and COVID-19. Lingering pandemic supply chain snags have also contributed to the problem.

Health Canada officials were lambasted during a House of Commons health committee on Tuesday for not handling the situation more quickly or effectively.

“The last time I’ve seen these products on the shelves in my community was May,” Fort McMurray-Cold Lake MP Laila Goodridge told the committee, referring to pediatric pain medication.

“That’s terrifying for a community that’s five hours from a children’s hospital.”

Health Canada says a ‘foreign supply’ of children’s acetaminophen has now been secured and will be available for sale at retail and community pharmacies in the coming weeks.

As many as 800 drugs are currently in short supply in Canada, Linsey Hollett, the director of health product compliance for Health Canada, told the committee.

Among those, 23 are considered critical — meaning the shortage poses a significant risk to patients and the health-care system, she said.

To bolster supplies of children’s acetaminophen and ibuprofen products, Health Canada has arranged to import some from the United States and Australia.

In the meantime, drugstores like the Bridgewater Guardian Pharmacy have had to place limits on the number of children’s Tylenol, Advil or Motrin containers customers can purchase, Kennedy said.

“I’ve seen grannies coming in and if they happen to be able to find a bottle, they’re sending it to their children in Alberta to help out their grandchildren,” she said.

Canadians close to the border are also travelling to the United States to purchase medications, many of which are fully stocked.

“In New Brunswick people are going across to the border into the U.S. and bringing it back over to Canada,” Kennedy said.

Meanwhile, supply shortages are also having a ripple effect throughout the supply chain as alternatives used to substitute for key drugs are now also running low.

For example, powders used for compounding medicines like acetaminophen or ibuprofen are now in short supply, she said.