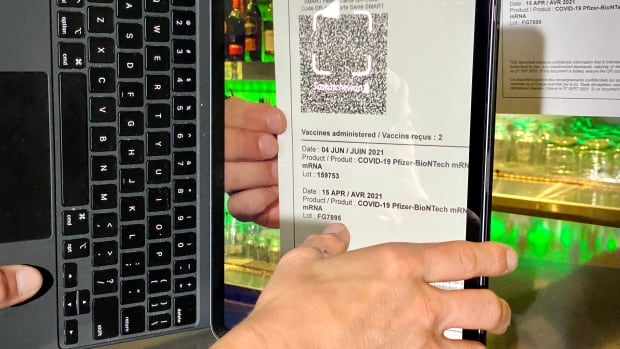 As of Friday, all Saskatchewan residents will need to show proof of vaccination or a negative COVID-19 test result to enter many businesses and organizations, including restaurants, gyms, bars and event venues.

On Wednesday, eHealth Saskatchewan launched two new apps to help with the COVID-19 vaccine verification process and gave a demonstration at Memories Fine Dining in Regina.

One of the apps — SK Vax Verifier — is for businesses to download. It will read customers’ QR codes to verify if they’re fully vaccinated. The other is an SK Vax Wallet app for residents to keep their personal QR code in for easy access.

“It’s very, very easy. I download both of them in an hour,” said Thomas Siarkos, owner and operator of Memories Fine Dining. “Simple, very simple.”

Siarkos said his restaurant and staff are ready for Friday and that the owner himself will be verifying vaccination at the door.

“Hopefully the customers realize that we have to abide by the government rules and it should be very easy. It shouldn’t be no problem whatsoever. Our number one priority is the health and wellbeing of our staff and, of course, the customers.”

Siarkos said that while there’s always some concern that residents won’t comply, he is hopeful the community will work to move forward.

“I hope that my compatriots and my colleagues in the restaurant business realize that these are the new rules and we have done them before. We didn’t protest when they were shutting us down or anything like that. So why this would be any different? So let’s move on. We need to put our province back on its feet.”

Fines for businesses that don’t comply

Not every business is embracing the new system.

Villains Strength & Conditioning in Regina recently sent an email to its attendees stating, “The vaccination policy is exactly that, a policy. It is in no way a law that is mandatory to follow (at this moment at least), and with that being said, we WILL NOT be requiring a proof of vaccination to workout at the facility.”

The province tells CBC that statement is false.

“Public health orders are not policy, they are lawful requirements made under legislative and regulatory authority,” the province said in an email.

The province said that if the gym intends to permit access to their facility without proof of either vaccination or testing, the business will be in violation of the public health order and could be subject to a ticket.

According to the province, the fine will start at $10,000 for corporations.

Will there be QR codes for proof of a negative test?

There are not currently any QR codes available for those who choose not to get vaccinated and instead opt to pay to get tested for COVID-19 and receive a negative result.

“We were beginning to look at the options around that, and the technology can support it. However, we’d be looking for guidance and requirements around that,” said Davin Church, vice president of programs and technology at eHealth Saskatchewan.

“There’s been investigation into kind of the feasibility and how it would be done, but we haven’t actually began developing that at this point.”

For the time being, those who are unvaccinated but have a negative test result will need to show proof through an online account that has their results, or a printout.

How can those without a driver’s license get a QR code?

Church said that in lieu of a driver’s licence, Saskatchewan residents can use a province-issued ID card to access their online health account.

While there is not currently a free vaccine certificate available to residents, Church said that is in the works.

“There will be another process through eHealth … to access a proof of vaccine certificate that at this point will have no cost.”

Church said access to the certificate will be available within the next few days.

On Wednesday the province’s Official Opposition issued a statement calling on the government to create a free phone-based service for people to access their vaccination records.

The NDP called the vaccine passport system “chaotic” and said the current web-based system can be difficult to navigate for those who have difficulty with computers, including seniors.

The Opposition also said the province had months over the summer to develop a proof-of-vaccination strategy, but opted for a “last minute rush.”

eHealth said it had been working with the federal government on the technology over the summer for travel purposes.

The Saskatchewan government did not announce a vaccine mandate until Sept. 17.

“We’re hearing from businesses and people who feel they’ve received little to no direction when it comes to proof of vaccination requirements coming into place on Oct. 1,” said  Opposition health critic Vicki Mowat.

“Not only that, the government is charging those who can’t use the difficult online system, many of them seniors, $20 to receive a printout. We need to make sure we’re taking down barriers and making it as easy as possible for everyone to get a copy of their vaccination record.”

For now, the original wallet cards that people received when they got their shots will still be accepted as proof of vaccination. But the province is hoping many will get the QR codes.

“Certainly the wallet card and any document has the opportunity to be forged and that has legal ramifications, and that’s why we worked toward more secure options,” Church said.

The free SK Vax Verifier app is now available in the Apple app store, and will be on the Google Play app store within the next two days.

The SK Vax Wallet app is currently available in the Apple app store and is expected to be in the Google Play store by Monday.

Why eating during the day may be beneficial for mental health

Oct 6, 2022 Mary Simonson
We use cookies on our website to give you the most relevant experience by remembering your preferences and repeat visits. By clicking “Accept All”, you consent to the use of ALL the cookies. However, you may visit "Cookie Settings" to provide a controlled consent.
Cookie SettingsAccept All
Manage consent