COVID rates may be much higher than reported. How bad is the current surge? : Shots 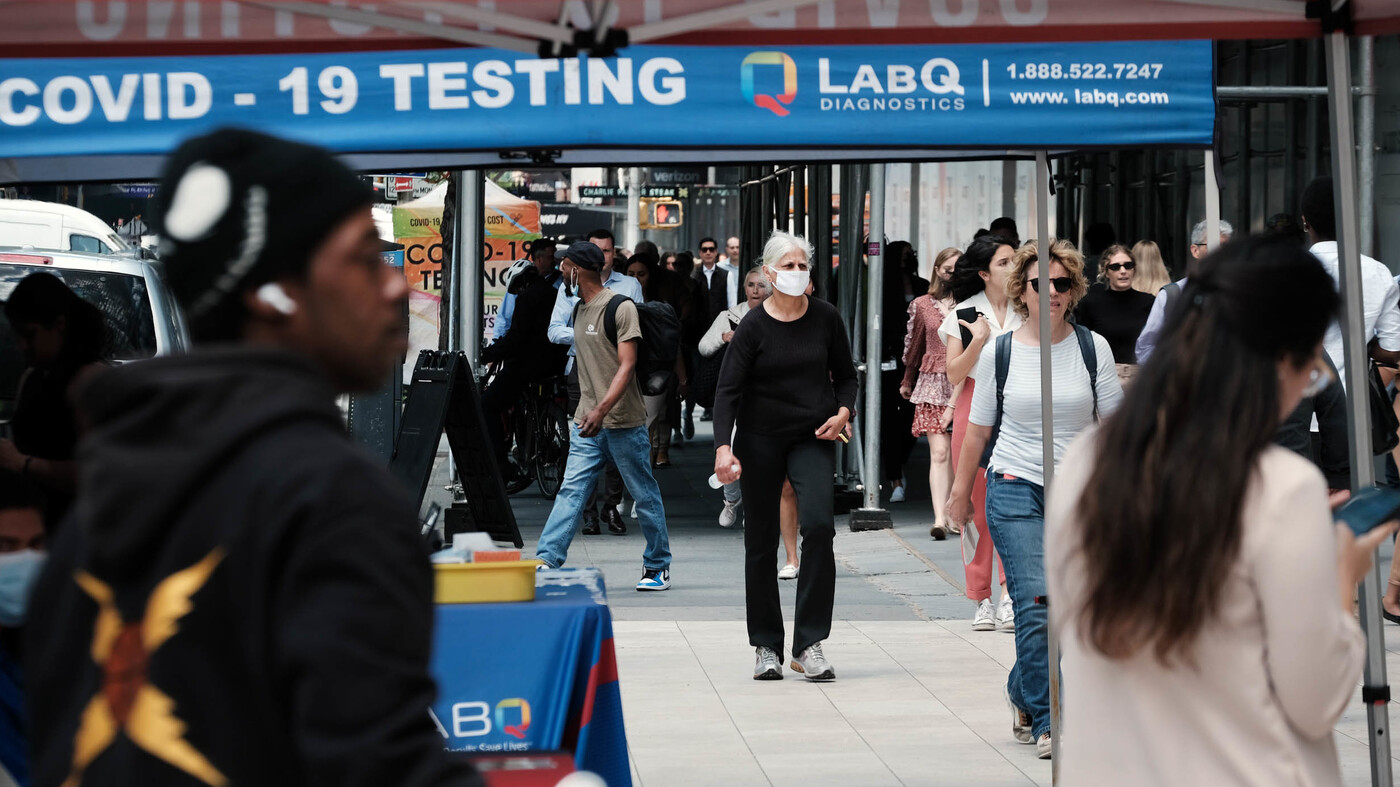 People walk past a COVID testing site on May 17 in New York City. New York’s health commissioner, Dr. Ashwin Vasan, has moved from a “medium” COVID-19 alert level to a “high” alert level in all the five boroughs following a surge in cases.

People walk past a COVID testing site on May 17 in New York City. New York’s health commissioner, Dr. Ashwin Vasan, has moved from a “medium” COVID-19 alert level to a “high” alert level in all the five boroughs following a surge in cases.

Cases of COVID-19 are — yet again — on the rise. The U.S. is seeing an average of more than 100,000 reported new cases across the country every day. That’s nearly double the rate a month ago and four times higher than this time last year.

And the real number of cases is likely much higher than that, according to health officials. Because many people now rely on at-home tests, “we’re clearly undercounting infections,” White House COVID-19 Response Coordinator Dr. Ashish Jha told reporters at the most recent COVID press briefing. Hospitalizations are trending upwards too, though only gradually still in most places.

Yet in most places, health officials haven’t called for any new COVID restrictions. So how big is the surge, really? And is there anything you should be doing about it?

Measuring the true number of infections

Official undercounts of cases are not exactly a new problem. At the beginning of the pandemic, many cases went undetected because tests were unreliable and supply was limited.

“We saw early on — in March 2020 — that maybe one in 10, maybe one in 12 infections were actually being captured,” says Jeffrey Shaman, an infectious disease specialist at Columbia University whose lab has worked to model the true number of infections.

Very early research efforts to figure out how many infections were out in the community involved testing a sample of residents for SARS-CoV-2 antibodies. As the pandemic progressed, that method didn’t work as well, Shaman explains, because antibodies after infection waned over time and because vaccinations complicated the antibody picture.

Shaman’s research group turned to using models to estimate the “ascertainment rate” — the portion of real infections that were being captured in official case counts. That rate has fluctuated — at the end of 2020, they estimated one in four cases were being counted. During the omicron surge it was closer to one in six.

Now with the widespread availability of at-home rapid tests that aren’t reported to health departments, Shaman thinks the true number of cases may be in the ballpark of eight times higher than case counts. In other words, instead of 100,000 new cases a day, the true number may be 800,000 cases per day.

Take that estimate with a giant grain of salt, he advises. It’s getting harder to get a firm handle on the current ascertainment rate.

Ellume COVID-19 home tests are seen at a CVS in the Navy Yard neighborhood of Washington, D.C., where senior citizens received free tests that are covered by Medicare on April 4.

Ellume COVID-19 home tests are seen at a CVS in the Navy Yard neighborhood of Washington, D.C., where senior citizens received free tests that are covered by Medicare on April 4.

Wastewater surveillance sites across the country reinforce the idea that the virus is on the rise. More than half of sites have seen “modest increases” in levels of virus, according to CDC, although the system doesn’t cover the whole country and is not yet set up to offer people an ongoing estimate of the true number of cases beyond official counts.

All of this is a predictable consequence of having easy, ubiquitous at-home tests, says Gigi Gronvall, a senior scholar at the Johns Hopkins Center for Health Security.

“For people to have that information at their fingertips to be able to get the results that they need so that they can act on them immediately — that’s totally worth it,” she says. But it does come at the expense of the data, “and so you have to infer that there are higher numbers of cases than are being reported.”

The next surge could be worse

As an epidemiologist, this uncertainty is not ideal, says Katelyn Jetelina, adjunct professor at University of Texas Health Science Center, who writes the Your Local Epidemiologist newsletter. And even if case counts are much higher than they appear, this summer may not see a health care crisis like previous surges, she says.

As the weather warms up and people spend more time outdoors, “transmission is a lot less because of the ventilation outside,” she says. Also, after the massive surge of infections from the omicron variant, she says, “we just have such high levels of infection-induced immunity that we have a very high immunity wall,” something CDC has estimated as well. Basically, if someone has had a recent infection they’re less likely to get infected again, so the virus might not be able to spread as much or make people as sick.

The country’s current population-level immunity is one of the reasons Maciej Boni, a professor of biology at Penn State’s Center for Infectious Disease Dynamics, says it makes sense for policymakers to hold back on rolling out mitigation measures for now.

“The reason is that we’re going to exhaust people’s patience and potentially exhaust certain health resources [and] political capital that we want to have saved up for when we really need it,” he says.

He predicts a much more dangerous surge is coming in the fall and winter. That’s when he thinks health officials should start to ramp “the new set of measures that’s likely going to be required to get case numbers down,” he explains.

Jetelina agrees that the country is unlikely to make big moves at the moment. “I don’t see sweeping policy changes until the virus has another omicron-like event or a huge mutation,” she says.

Figure out what’s happening with the virus where you are

While public health officials may not be raising the alarm over the rise in cases, health researchers agree that certain people should take notice of the fact of the current, partly invisible surge: older people who haven’t been vaccinated or boosted recently.

“That’s the low-hanging fruit here,” Jetelina says. “Just get the vaccine. Go get your booster. Don’t think very hard about it.” Nearly one third of people older than 65 who are eligible for a booster haven’t received, one according to CDC’s vaccination tracker — despite clear evidence that it reduces risks of hospitalizations and death.

Higher-risk people generally should be more careful if cases are getting high. But with official reports of case counts from health agencies missing so much data, how do you figure out how bad COVID transmission is in your community?

Just as when a storm’s predicted, you might watch the meteorologist on TV but also step outside to look at the sky, so public health experts say, it’s smart to tune into both official and anecdotal signals of surging cases.

Do keep an eye on case counts (knowing they are only capturing a portion of the true cases out there) and hospitalizations, and listen to public health officials. But also pay attention to the texts from friends and coworkers telling you they’ve gotten COVID-19.

“That anecdotal evidence could be useful in making decisions, too,” Jetelina says. If there seems to be a sudden spike, you’ll know there’s more virus circulating where you live.

Another signal to look for: If your workplace or kids’ school does surveillance testing — that is regular tests of everyone, even people who aren’t symptomatic — that can be really helpful for keeping a pulse on what’s happening with the virus locally.

“Where I am in Miami-Dade County, there’s still municipal employees that may need to test regularly, and we might get some kind of underlying signal of when we’re having a surge,” says epidemiologist Zinzi Bailey of the University of Miami.

Bailey also likes using COVID-19 hospitalization data as a proxy for what’s happening in her community.

Jetelina uses trendlines in case counts to make decisions for her own family. “My ears start perking up [when there’s] anything over a 50-75% increase in the past two weeks,” she says. Looking at case trendlines, if the line is “just starting to slowly creep up, then fine, but if the acceleration is getting faster and faster, that’s when something seems up to me.”

Then there’s grabbing a raincoat when weather’s foreboding — i.e., getting your vaccine protection, or getting boosted if you’re not up-to-date. Even though it’s easy to make an appointment at a pharmacy, fewer than half of Americans who got their initial vaccines still haven’t gotten the first booster that was authorized in the fall. And now a second booster is available to anyone over 50.

Beyond vaccination, if the virus is spreading a lot in your community right now, anyone who’s high-risk because of age or underlying conditions — or lives with someone who is — would be smart to dial up on personal COVID-19 precautions: being selective about time in public spaces indoors and wearing a high-quality, well-fitting mask when you do.