A glorious way of eating in Greece 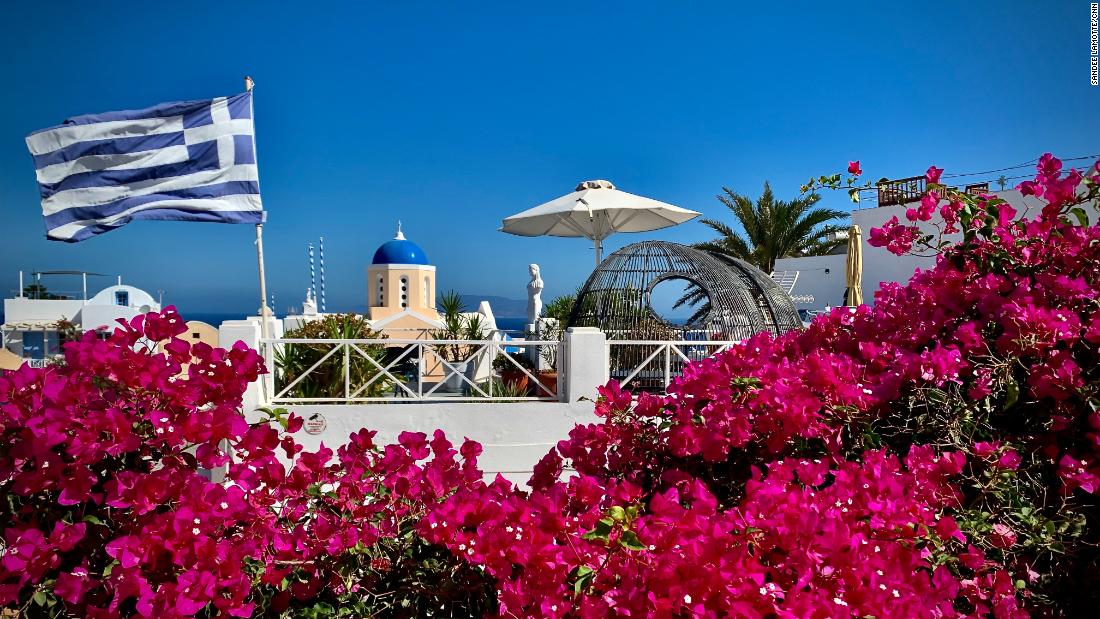 (CNN) — The Greek islands! It was a bucket list trip, made even more precious as a getaway after the long pandemic travel drought. I’d been to Athens before, so this trip was all about the islands, including a visit to the beautiful cliff homes on Santorini.

I’d seen those photographs of white and blue houses perched over the sea. Could the island really be that stunning in person?

To sweeten the trip, I would get to dine on the Mediterranean diet in one of its home countries. It’s an award-winning style of healthy eating I had been covering for years as a health journalist. I was going to see, smell, taste and take pictures of many of the foods I was writing about, based on recipes handed down over the centuries from Greek yiayiás to their grandchildren. Would the meals look and taste that healthy in person?

The answer to both — yes.

On the island of Milos, my fiancé and I dined at a low-key café called Nostos Sea Food, one of many eateries along the waterfront. Our taxi driver told us it was a favorite of the locals, and when our meal arrived, we could immediately see why. Dolmades, stuffed grape leaves typically served in rolls, had been transformed into tasty, shrimp-filled bites covered in lemon foam.

Tiny dolmades stuffed with shrimp and grain are covered with lemon foam and served with a whoosh of tzatziki dip.

Galatopita, a classic ruffled milk pie, was an eye-catching feast of buttery phyllo and custard, artfully decorated with pistachios. Despite what looked like a tiny kitchen, the chef had managed to create an experience worthy of a four-star restaurant.

Traditional ruffled milk pie is artfully displayed with Greek pistachios and a rosebud.

Throughout Greece, every meal we ate was prepared with pride. Creamy, rich Greek yogurt topped with walnuts and honey was more like a beautiful dessert than a classic breakfast.

On Santorini, we kept coming back to one restaurant that served traditional Greek cuisine — but on steroids. At 218 Degrees Cafe, a freshly created version of spanakopita, the beloved Greek spinach pie, was like nothing I’d experienced in the United States. Zucchini fritters were packed with fresh vegetables and herbs, then fried ever so lightly in olive oil. They were served with another Greek staple: tzatziki, a yogurt-based dip full of cucumber, dill and lemon.

Here’s a feast of Greek dishes with a stunning view of the cliffs of Santorini: (clockwise from top left) horiatiki, zucchini fritters, grilled vegetables, spanakopita and Greek yogurt.

Traditional Greek salad, called horiatiki (which means village), was another revelation. For one, there was no lettuce, just lots of plump, juicy tomatoes, cucumbers, green peppers and onions, laced with several of the many varieties of Greek olives, and topped with large slabs of fresh feta and a sprinkle of olive oil.

And the feta! No sharp tang like the feta I’ve always known stateside. This cheese melted in my mouth, rich, creamy and delicious. No wonder Greeks say feta can go with anything.

One of my favorite dishes was so very simple: Perfectly roasted veggies glistening with olive oil, topped with a sprinkle of seeds and herbs. Of course, It didn’t hurt that we were eating these foods over a vista of the cliffs of Santorini. And yes, the white and blue houses are just as beautiful in person as they are in pictures.

I’m not a professional photographer, but it’s hard not to get a beautiful picture of Santorini’s famous blue-and-white dome houses.

Benefits of the Mediterranean lifestyle

Speaking of olive oil, I can confirm it’s the king of the Mediterranean diet. It’s such a part of Greek life that if natives think someone is a bit crazy, they say they are “choris ládi” or “losing oil.”

While the Mediterranean way of eating is based on traditional foods from the 21 countries that surround the Mediterranean Sea, they share a common theme. The focus is on simple, plant-based cooking, featuring fresh vegetables and fruits, whole grains, beans, seeds and nuts and a heavy emphasis on extra-virgin olive oil.

Say goodbye to refined sugar and flour except on rare occasions. Fats other than olive oil, such as butter, are consumed rarely, if at all. Red meat can make a rare appearance, usually only to flavor a dish. Instead, meals may include eggs, dairy and poultry, but in much smaller portions than in the traditional American diet.

Fish, however, are a staple. At one local restaurant, we watched three young men feast on a huge, freshly caught fish, leaving nothing but a few bones and a head. Speaking of heads, fellow finicky eaters, get used to it. Most seafood I saw in Greece was served whole, eyeballs and all. For someone used to fish fillets and ready-to-eat shrimp, it took a bit of getting used to. (I also wasn’t keen on all the octopuses hanging around.) But if you live by the sea, you expect fresh — and that’s what you get.

Don’t be surprised to find your dinner hanging by the edge of the sea.

Don’t forget fresh fruit, the foundation of dessert here. While you could easily buy the traditional baklava or loukomadies (Greek doughnuts) at most tourist-based restaurants, that’s not what the locals eat every day. At a restaurant one night, I saw a family order a fruit platter topped with watermelon as a birthday cake.

This Greek family ordered a fruit “birthday cake” with a candle they blew out before serving.

Orange, lemon and fig trees grow in backyards, ready to be plucked with a quick walk outside. I even saw orange trees growing along an Athens sidewalk.

Unlike a sodium-heavy diet, herbs and spices take precedence over salt and pepper to flavor Mediterranean dishes. Fresh herbs are so important that Greeks grow them in every nook and cranny. In Athens, I saw pots of herbs in windowsills, along sidewalks next to parked cars and in the base of trees that line the streets.

No space is left unused. Greeks grow herbs in pots tucked into tree bases on sidewalks or next to parked cars.

But the Mediterranean “diet” is so much more than food. It’s based on movement, such as walking, biking and gardening, as well as mindful eating and the gathering of friends and family.

It was clear everywhere we went — as soon as the workday ended, people began to gather at the town’s center or by the sea, kids in tow. Families and friends reconnected, news of the day was shared, laughter floated on the air — and then it was time to gather for a meal.

Watching the connection happen was a highlight of the trip. We can’t wait to go back.